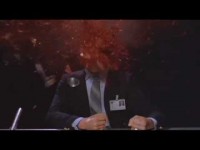 You have been selected…

Like the Last Starfighter, I’ve completed the game but have no idea about the journey that lies before me. And no prosthetic faced Robert Preston to pick me up in a spaced up 1983 Corolla and whisk me away from my backwoods trailer park (Sydney) to a fantastical alien world either. No. Just a buttload of paperwork and an 18 month ticking clock.

What to do? So much to do! What first? Call the girlfriend and tell her we need to get married? Yes. Good idea.
Line’s busy. Decide to propose via text. She says no. I tell her I got a Green Card. She says yes. Romance.

Tell the folks? No. Can’t deal with the inevitable nuclear level of guilt that will entail. No need to put the maternal Enola Gay on the runway just yet.

Get on Facespace and broadcast it to the world? No. Haven’t got it yet. Long way to go before that visa puppy becomes reality. Text a few choice actor friends instead who’ve religiously entered the annual DV lottery for nigh on ten years. Receive back an understandable litany of curses and congratulations. Schadenfreude. Feels good. Very Australian.

I haven’t really thought this through. Entering the DV Lottery is easy. Takes 5 minutes. Done it twice before. Hadn’t really given a lot of thought to what I would do if I actually got it. FFFFFFAAAARRRRKK!

Nurofen: Targets the source of the pain.

Flashforward to Now: 6 weeks out from Departure.

So I’m leaving on October 10th with a wife, 32kgs of luggage and not enough money or vegemite. So far, so standard.

In the past fifteen months I’ve got married, had to remember every address I’ve ever lived at since age 16, been poked, prodded, jabbed, zapped, turned my head and coughed, got treatment for RSI from typing a million forms and still I feel massively underprepared.

Should I buy a car? Rent a car? Steal one?  Where will I live? How does the tax system work?  When can I make jokes about Obama? What do I do with all my stuff? Where can I watch AFL? How do I get a license? A social security number? What is a social security number and why do I need it? Why is everyone so fucking uptight about a goddamn credit rating? Is Patrick Swayze really dead or just in a career lull? WHAT SHOULD I HAVE DONE BEFORE I LEFT?!?!

The stress levels are peaking as the enormity of what I’m doing is really kicking in.

But how did I get to here? What was the process? What advice have I had? Well I’m going to try and outline that over a series of posts that will hopefully help any others going through/wanting to go through the seismic emotional shift that is moving to the USA. Comments, questions, suggestions, advice, tips, jeering sneers at my naïveté and propensity for poor decision making are warmly welcomed.

And hopefully along the way I’ll answer my own sixty four million dollar question: what the actual hell am I going to do in LA?